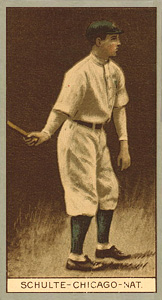 Noted their name because of the chocolate brown backgrounds of every card. The players are rather crude drawings and not very realistic. The backs have the player’s full name and stats. There are 13 Hall of Famers in the T207 series and 200 players that make up the set.There are 7 different tobacco brand backs.

A very tough card to locate in the T207 set is the Irving Lewis card. It was created in two forms, which is either with the emblem on the sleeve or without it. The card that does not have the emblem on the sleeve is the more difficult card of the two to locate however, because the Lewis card is such a challenge to find, collectors are content with having anyone that they are able to acquire.

The cards were issued in two series throughout the year.