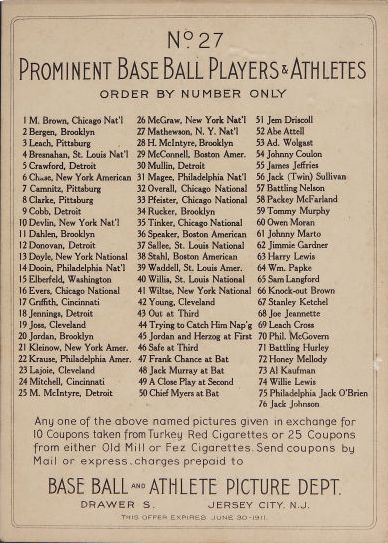 Unlike many T-series cards, T3 Turkey Reds weren’t placed into tobacco packages. Instead, they were available only by sending in coupons found in packages of cigarettes. As premiums, the cards were awarded as an incentive for consumers to keep smoking Turkey Red, Fez and Old Mill cigarettes. In order to get a single card, coupons needed to be sent from several cigarette packs, which accounts for the general scarcity of cabinet cards, and the Turkey Reds are no exception. It required ten coupons from Turkey Red or 25 coupons from Fez or Old Mill. Surviving coupons from the promotion give dates of 1910 and 1911, establishing the general timeframe the set was issued. The set featured 100 baseball players and 26 boxers.