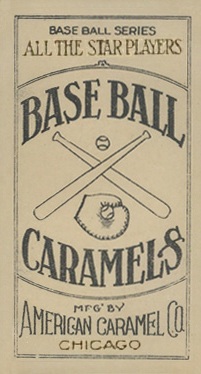 American Caramel Co. issued this 20 card set in 1910. The set consists of 11 Cub players and 9 White Sox; the front is a color lithograph similar to the (E90-1) with different poses. The backs are different then the other E90’s that is now says Chicago and no longer has 100 subjects and in it place is “All the star players”.

The following cards are tough to find

The Tinker has a blue and green background variation