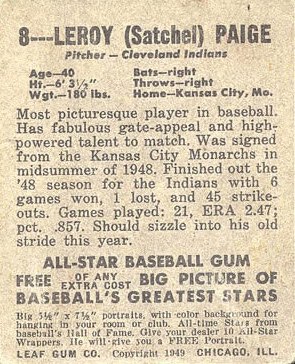 Chicago Leaf Gum Company issued this first color set of cards after the war in 1949. Some cards have a 1948 copyright but it is believed they were not issued until 1949. The fronts are colorized photos with bright backgrounds. Backs are numbered and have the player’s bio. It is believed the company issued the set skipping numbers and half of the cards are in short supply, they are noted as Short Prints. This set contains many significant cards of player’s first appearances, better known as rookie cards, including: Jackie Robinson; Stan Musial; Phil Rizzuto; and, by far the most popular 1948 Leaf card, Satchel Paige. In addition to such great rookie cards, the set also contained legends who were either at their peek years, near the end of their legacies, or retired, such as: Joe DiMaggio, Ted Williams, Babe Ruth, and Honus Wagner.

The SP cards are extremely tough to find
Considered the most difficult post-WWII set to put together
Poor centering and registration is common
The cards are numbered to 168, but only contain 98 baseball cards

No significant errors or variations.