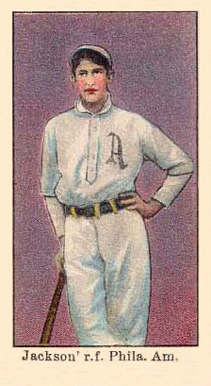 The American Caramel Co. from 1910-1911 issued this set with the majority being distributed in the first year. The cards where distributed with sticks of caramel candy. The fronts are color reproductions of photographs, backs state 100 subjects but actually 120 are known to exist.

Widely considered the most popular caramel set mainly due to the availability and plethora of HOFers. However, the set does contain some very difficult cards to find, such as the Duffy and Mitchell. The set also contains the rookie card of Shoeless Joe Jackson.

The following cards are very difficult to find: