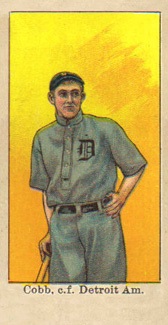 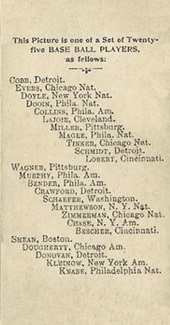 The E102 set is considered an anonymous set because the manufacturer is unknown. The set is widely considered to be the first set distributed by candy makers. Many consider the Ty Cobb of this set to be his rookie card, however since the distribution dates are not exactly known, there is debate amongst collectors whether this is the case.

These rare cards share nearly identical designs with several other candy issued cards from the same era, such as Croft’s Candy, Dockman Gum and Nadja Caramels. The 50 players/poses are the same players/poses found in the E92, E101, and E106 sets.