Without doubt, Mickey Mantle is one of the most celebrated and beloved baseball players to ever play the game. Originating from the small town of Commerce, Oklahoma, Mantle went on to play 18 seasons with the New York Yankees, spanning from 1951 to 1968. During his career, the “Commerce Comet” would lead the Yankees to 12 American League pennants and 7 World Series Championships. As a result, Mickey Mantle’s trading cards have remained popular and sought after today.

There are a lot of Mickey Mantle sports cards. In fact, even to this day, more cards of Mickey Mantle continue to be produced. While most think of cards issued in packs of gum, Mantle cards were issued in hot dog packets, dog food, potato chips and a whole range of things. To make sense of all of these, we will break up Mantle’s cards in 3 categories: The Super Set, The Master Set, and the Basic Set.

As this name might suggest, the Mickey Mantle Super Set includes all his cards, from the beginning of his career to the cards being still produced today. According to the PSA registry, to complete the Super Set, one only must compile 2865 unique Mickey Mantle cards, of which some will cost tens of thousands of dollars. If you’re able to summit this Mantle Mountain and collect all these cards, congratulate yourself, as the top set currently on the registry is sitting at slightly less than 60% complete.

A complete checklist for the Super Set can be found here

The Mickey Mantle Master set has a much more manageable 247 cards, and only includes cards from his playing from 1969 and earlier. Even though the Master Set is less than 10% the size of the Super Set, it still contains several extremely rare cards, such as the 1952 Tip-Top Bread Label, Venezuelan issued cards and other odd-ball issues. Very few collectors will even attempt to complete this set, and the PSA registry currently shows only one person as having completed it.

A complete checklist for the Master set can be found here

The Mickey Mantle Basic set is made up of 21 cards and contains his regular issue cards from Topps and Bowman, spanning from 1951-1969. Although few in size, these are the cards that are most plentiful and popular with collectors. This set is highlighted by the 1951 Bowman rookie and 1952 Topps cards, which are the most well-known and valuable cards of the Mick.

A complete checklist for the Basic Set can be found here

Here is a quick overview of the Basic Set, in addition to other popular All-Star and combo cards.

The Mantle rookie comes from the scarcer high series and is commonly found with defects such as prints lines, wax stains and poor centering. The card is also frequently counterfeited, so it is recommended to only buy graded examples from companies like PSA, SGC or Beckett.

Traditionally, the rookie card of a player is the most popular and expensive card, however that is not the case with Mickey Mantle. His 1952 Topps card transcends all other Mantle cards and is possibly the most famous card in the hobby.

To understand why this is, we first need some background on the set to provide some context. Prior to 1952, Bowman had a firm lock on the trading card market, however in 1952, Topps Chewing Gum Company of Brooklyn, NY, printed and distributed its first major baseball card set.

The set, consisting of 407 cards, was printed in 6 unique series and sold and distributed during the baseball season. The series are divided as follows:

Each series was printed on a 100-card half sheet. However, since less than 100 cards are in each series, some of the cards were double printed and showed up twice on the sheet. It is important to note that the Mickey Mantle card was in the 6th series and was double printed. We will look at this more in detail later, but the two different Mantles on the sheet contain minor variations. Below is an example of a partial sheet of the 1952 series.

The first series was produced and sold first, but popularity didn’t peak until the second series was issued. By the time Topps got around to selling the cards from the 6th series, demand was very limited as it was late in the baseball season. As hobby lore would have it, Topps was stuck with a large quantity of obsolete inventory from the 6th series and eventually loaded up the cards, hauled them out to sea and dumped them to free up warehouse space. While this story is the most commonly heard explanation, it is important to note that this has never been verified.

It is also important to note that Topps’ quality control of cutting the cards was rather poor during this era. In today’s hobby, collectors seek after cards that are perfectly centered, however, most cards from the 50s and 60s suffer from centering problems due to poor sheet cutting procedures. The cards from the 1952 Topps set are no exception. Most cards that are found suffer from being off-center, miscut or diamond cut.

Because of these factors – the popularity of the set, the scarcity of the card compared to earlier series and the difficulty to find the card in high grade created the perfect storm in terms of value. While even low-grade examples will sell for $10,000+, higher grade examples can reach staggering amounts. In April of 2018, Heritage Auction sold the following PSA 9 example for $2,800,000.

Currently, PSA has only graded 3 perfect PSA 10 examples. While no PSA 10s have been sold in recent years, it is estimated that one would sell in the $10,000,000 range, officially making it the most valuable baseball card in existence. Below is a scan of Denver-based collector Marshall Fogel’s PSA 10:

Because of the popularity of the 1952 Topps Mickey Mantle, it has become a target for scammers and counterfeiters. Nearly every ungraded example available for sell online is almost guaranteed to be a fake. Fortunately, we have developed a comprehensive guide to help navigate the waters of buying this iconic card here:

As can be seen in the tables above, the value of a card can greatly depend on the condition of the card. For example, a 1952 Topps Mickey Mantle card can range anywhere from $2000-$10,000,000. Condition is important. For the sake of simplicity, the values above were grouped into three categories, but typically condition is based on a 10-point scale. If you would like to see the criteria for the 10-point scale, please visit our page on grading cards.

However, if we assume condition is constant, here is a list of Mantle’s mainstream cards, ranked by from most valuable to least valuable (PSA 5):

As can be seen from the graph, the 1951 Bowman and 1952 Topps cards stand head and shoulders above the rest. Starting in the mid-50s, the cards stay somewhat flat in value, decreasing slowly in value as the cards extend in to Mantle’s later years, also becoming more plentiful and easier to find. Another important take-away from the graph is the value of the regular issue cards compared to the All-Star, MVP and combo cards. The regular issued cards always carry a premium when compared to the other cards in the same year, with the only exception being the 1961 Topps cards. In the 1961 Topps set, the cards from the last series carry a significant premium, which is where the Mantle All-Star card is located. Because of this, the regular issued card is valued roughly the same as the All-Star card.

When it comes to errors and variations of the mainstream Mickey Mantle cards, there only exists three examples, the 1952 Topps Type I & Type II variations, the 1956 Topps card stock variation, and the 1969 Topps White/Yellow name variation.

The most famous Mickey Mantle card, and arguably the most popular card in the hobby, actually comes in two variations. When cards are produced, they are not printed individually, but rather on a sheet with other cards and then cut down to individual cards. On the 1952 Topps sheets, the Mickey Mantle card was double printed, or printed twice, so there actually exists two different variations of the card, Type I and Type II. Each type has a few unique identifiers which will be discussed. 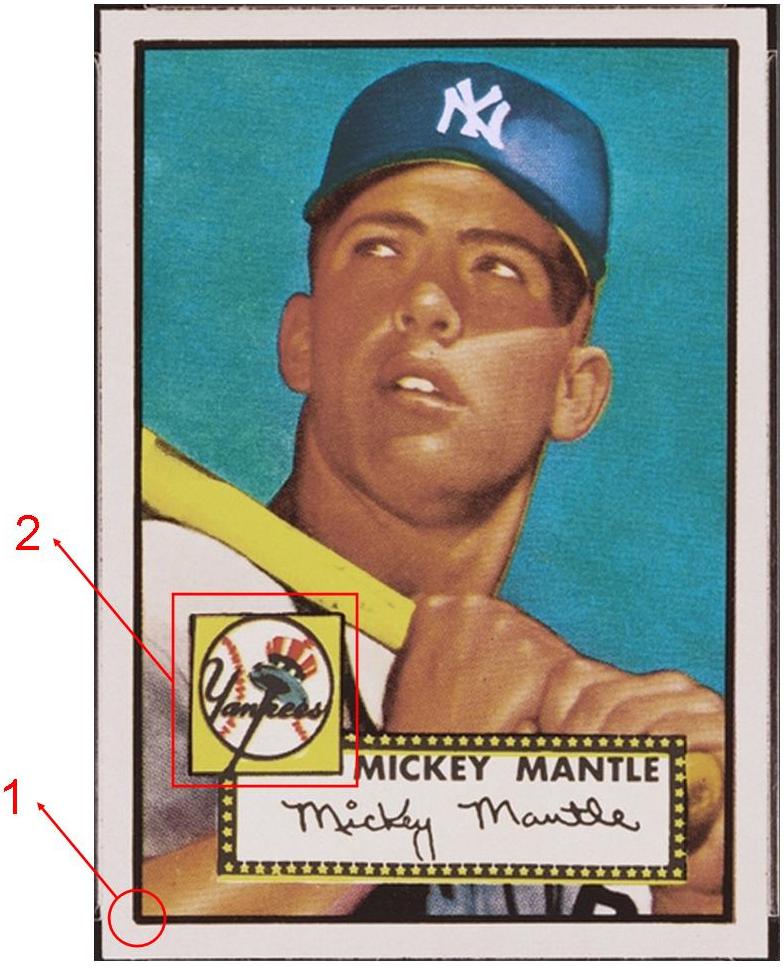 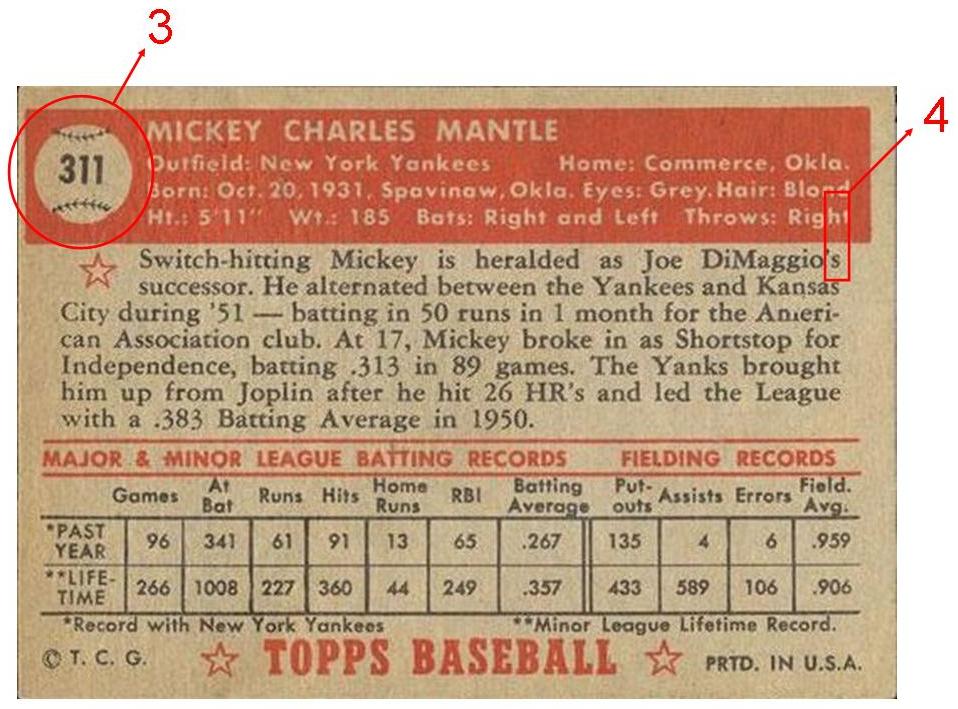 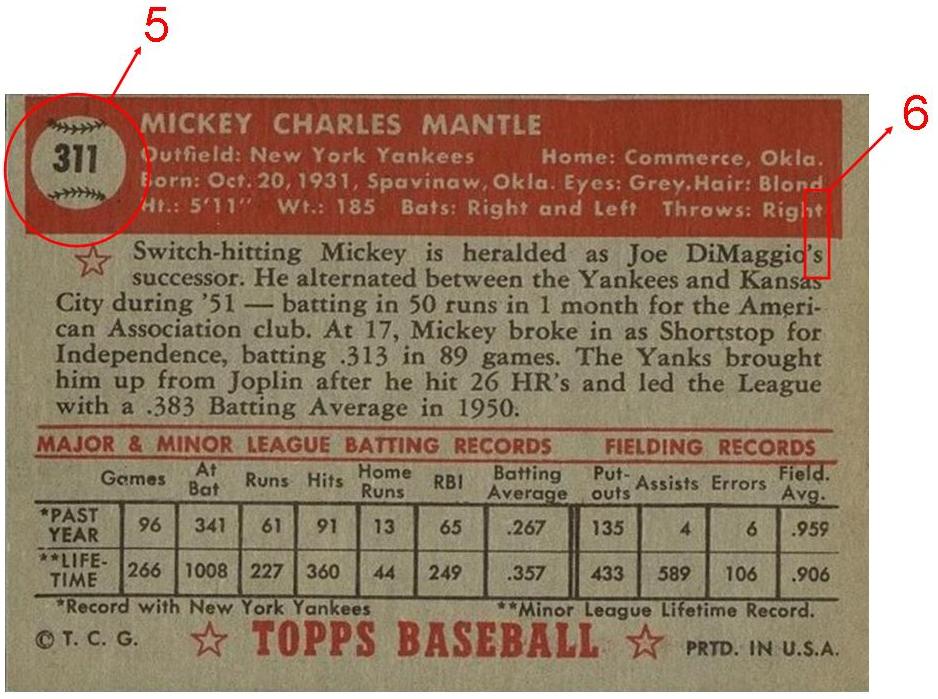 In the 1956, Topps printed the many of the cards on two color of card stock, gray and white. While the front of the card looks identical, the back color is different. In most cases from this set, the back-color variation does not impact the value significantly. However, white backed cards from the 2nd series or cards numbers #101-180, do carry a premium. Mickey Mantle’s card happened to fall in the second series, which means his white backed variation carries a premium of 30-50%. Below is a picture of both variations:

The second variation of a Mickey Mantle card is the 1969 Topps regular issued card. Below is an example of both variations:

The word “Mantle” inside the red circular name plate is printed in both yellow and white. The “white” name variation is rarer and typically carries a premium of 3-5X the value of the “yellow” name variation.

As mentioned earlier, there are literally thousands of Mickey Mantle cards, many of which were issued after his career or considered odd-ball issues. In this section, we will discuss a some of the more well-known non-mainstream issues.

O-Pee-Chee cards were produced of Mickey Mantle from 1960-1968 and have the same front as the USA Topps issued cards but have slightly differing backs. Below is a comparison of the 1966 Topps and O-Pee-Chee cards:

The only difference on the cards is near the bottom where is says “T.C.G. Printed in USA/CANADA”. The O-Pee-Chee version does carry a slight value premium over the standard Topps issue.

From 1959 to 1968, Topps printed and distributed cards in Venezuela. These cards were printed on a low-quality card stock and extremely rare to find. Almost all of the surviving Venezuela cards are extremely low grade. Many of the Venezuela cards look identical to the USA Topps issued cards, while some have the words translated to Spanish. Here is a comparison of the 1962 Topps Manager’s Dream card:

While the Venezuela cards are thinly collected, they still demand a large premium over the USA issued cards, up to 5-10X more.

In the late 1950s, Topps started to include insert cards into packs. The inserts came in different shapes and sizes and included stamps, coins, posters, et. The inserts typically displayed the more popular players and are more plentiful than the other regular issued cards in the set. Consequently, most insert cards only are worth a fraction of the value yet are still collected by people today. Here is a list of all the Mickey Mantle insert cards issued by Topps:

If so desired, we could fill a small volume of books discussing all the other odd-ball issued Mickey Mantle cards that make up the Master and Super set, but this guide is intended to only cover the mainstream cards in detail and to make you aware of the plethora of other Mickey Mantle cards available. If you are looking to sell Mickey Mantle or any other vintage sports card, please contact us here.